For uniform, cross-sector and international description of processes and specifications in cleanroom technology, standards are continuously developed and supplemented with current research findings and experience. Besides the ISO Guideline 14644, VDI is often used to establish standards. We present both guideline series and take a look at their relationships as well as differences in cleanroom classification in our blogpost.

To be able to classify cleanrooms according to their criteria and requirements as well as their air purity and qualification, on the one hand the cleanrooms themselves and on the other hand also the individual cleanroom areas must be considered. All factors such as room planning, ventilation technology, surface cleanliness and clothing of the staff are included in the classification. Both guideline series ISO 14644 and VDI 2083 are divided into individual parts or sheets and place different emphases in the evaluation of cleanroom areas and their standardization aspects.

The developed standard DIN EN ISO 14644 covers the planning and the operation as well as the monitoring of the cleanrooms.

The ISO 14644 directive family is divided into various parts for this purpose. Whereby parts 1 and 2 cover the entire cleanroom. The following table gives you an insight into the first 5 parts of DIN EN ISO 14644. The complete tables (ISO 14644 and in the following VDI 2083) you will find in our Whitepaper “Standardization VDI 2083 and ISO 14644”

The set of regulations VDI 2083 is the result of the directive work in the VDI (‘Verein Deutscher Ingenieure’). The VDI guidelines describe the current state of the art. They are based on ISO 14644 and further extend the guidelines contained therein. Within this standard, COLANDIS has been contributing, and still contributes, to a variety of sheets and their regular version. The following table is an excerpt from VDI 2083. 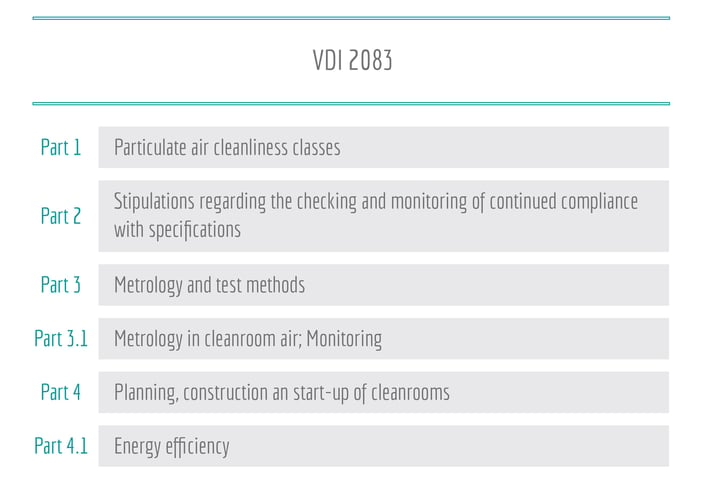 The most striking differences between the two regulations DIN EN ISO 14644 and VDI 2083 is given by their intensity. While the ISO 14644 directive family guidelines covers cleanroom technology in just 10 parts, the VDI 2083 family, with over 20 individual sheets, represent the most comprehensive set of rules in the world for the various cleanroom aspects and areas.

Based on ISO 14644, VDI 2083 informs more comprehensively about the cleanroom issue without disagree to ISO 14644 directive family. The VDI directive family can be seen as a kind of complement to the ISO guidelines as it addresses issues such as energy and cost efficiency, as well as industry-specific issues that are rarely addressed in the ISO set of regulations. Even though the VDI 2083 standard contains more detailed information than ISO 14644, both directives are considered to be absolutely equivalent standards for cleanroom technology.

While ISO 14644 is considered an international standard, the VDI guidelines are only national. Nevertheless, Austria and Switzerland have adopted the VDI 2083 in order to promote the standardization of cleanroom technology. In the same efforts, several other countries have extended ISO 14644 with certain specifications, which must always be taken into account in international cooperation.

Would you like to read more about standardization in the cleanroom? Then simply download our free whitepaper “Standardization VDI 2083 and ISO 14644”!

The cleanroom blog informs you about cleanroom technology.